According to a recent report, fewer adults are facing the dental implants vs. dentures dilemma these days. That’s because although most older adults have decay in their teeth, overall more and more of them are keeping their teeth, according to a report recently released by the Centers for Disease Control (CDC).

A Fast Decline in Edentulous Rates 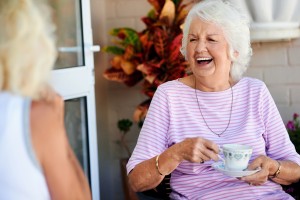 The most recent data for the rate of edentulism (complete loss of teeth) comes from the National Health and Nutrition Examination Survey, and is summarized in a report released in May by the CDC.

And it’s worth noting that although fewer seniors may be needing complete dentures, most of them can still benefit from dental implants, since two-thirds of adult age 65 and over have lost at least one permanent tooth.

However, there are many potential barriers to eliminating toothlessness completely. One is that not everyone is benefitting equally from the dramatic drop in toothlessness. The CDC report shows that the toothlessness rate for non-hispanic blacks (29.2%) and non-hispanic Asian (24.2%) lags behind that of non-hispanic white (16.9%) and Hispanic (14.9%).

This is still an improvement, since the toothlessness rate for non-hispanic blacks in 1999-2004 was 32.8%, but it’s nowhere near the drop seen by other parts of the population.

As oral healthcare needs change, Rice Dentistry in Irvine is prepared to help our older patients with whatever needs they may have. If you would like to make an appointment for yourself or an older relative, please call (949) 551-5902 for an appointment with an Orange County dentist.