Jewel Inlays by the Cosmetic Dentists of the Maya 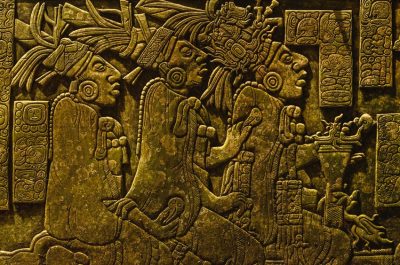 Although scientific dentistry is a relatively recent innovation, cosmetic dentists developed their art alongside more primitive forms of the art thousands of years ago. One great example is the Maya, who shaped their teeth and inlaid them with jade, pyrite, and other gemstones.

No Anesthesia and No Power Drills

The Maya civilization began about 2000 BCE and flourished through the first millennium. It occupied hundreds of city states throughout southern Mexico and much of Central America. The Maya cosmetic dentist worked without many of the tools and comforts that we consider standard today. With no pneumatic or electric drills, the Maya cosmetic dentist relied on hand power, using a bow drill to create a whole in the front teeth, typically the front 4-6 teeth on the top and bottom, making these inlays somewhat similar to porcelain veneers: not a health-related treatment, but, instead, purely cosmetic.

And without any kind of anesthesia, it was likely quite painful, especially some of the more extreme examples of teeth filing.

Another common cosmetic dentistry procedure among the Maya was the filing of teeth. This was done before the inlays began being used, and often people had both inlays and filing of teeth. Maya had their teeth filed in many different ways. Sometimes the teeth were just notched. Other times, they were squared off on one or both sides. Sometimes the Maya filed teeth down to create small teeth. Possibly this is because people wanted to look old, rather than young, since tooth wear would naturally create small teeth?

Who Had Their Teeth Treated?

Although you might think this practice was reserved for the social elite, it was, like cosmetic dentistry today, accessible to much of the population. Depending on the time and place a survey was taken, the number of people who had their teeth treated ranged from 22% to 65%. It seems that both men and women had their teeth modified, although sometimes women preferred filing to inlays, and sometimes it was the opposite.

What about Reconstructive Dentistry?

Although Maya dentists were obviously skilled at making holes in teeth and filling them, they did not use these skills to remove tooth decay and perform reconstructive dentistry. Some people will tell you that this is because they didn’t have tooth decay, but this is not true.

The Maya had similar amounts of tooth decay as other primitive agricultural societies.  In one sample of 20 adult skulls, all showed some degree of tooth wear, often severe. Calculus deposits were present on 19 of the skulls, and 15 of them had cavities. Eleven of the people had lost teeth before dying (although the researchers in this study didn’t rate skeletons by age, life expectancy for this period was 25-35 years), and six had abscesses in their jawbones (caused by an infected tooth we would treat with a root canal). One skull had rotated teeth, another malocclusion, and a third had an impacted wisdom tooth.

Of 10 children’s skulls, seven had cavities, showing that by about age two children started to get cavities.

So the Maya had plenty of reason to try to repair their teeth, they just didn’t seem interested in restorative dentistry.

Instead, they were interested in making their teeth beautiful rather than functional, and a class of modern cosmetic dentists arose to help accomplish this.