In Maya Mythology Bad Dentures Made a God Die of Shame

We’ve already talked about the amazing feats performed by Maya cosmetic dentists, but it isn’t just in practice that the Maya were focused on the importance of cosmetic dentistry. The centrality of good teeth is enshrined in the Popol Vuh, the Maya book of the people, which contains the most complete instance of the Maya creation myth. 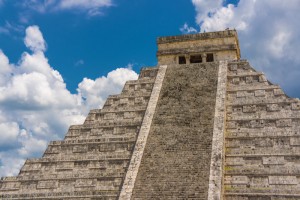 Seven Macaw was a bird whose feathers were so brilliant that they gave off light, but his true pride was his mouth full of dazzling bejeweled teeth. Remember, the Maya often put jewels in their teeth to make them more attractive, and those in Seven Macaw’s teeth were so bright that they illuminated the land, albeit dimly. Since this was in the days before the sun and moon were created, the wooden mannequins were deceived by Seven Macaw’s boasts that he was the sun and the moon, and the creator of the world.

Hearing Seven Macaw’s false boasts, the hero twins Hunahpu and Xbalanque went down to earth to kill him.

Wounded, But Not Killed

The hero twins waited by Seven Macaw’s favorite fruit tree, and when he perched in the tree, Hunahpu shot him with his blowgun. The shot hit Seven Macaw in the jaw, knocking him to the ground.

But when Hunahpu and Xbalanque came to finish him off, Seven Macaw put up a great fight, ripping off Hunahpu’s arm and escaping.

When he got home, though, Seven Macaw realized his wounds were serious. He experienced terrible jaw pain from the dart, so severe he could barely talk and feared he wouldn’t be able to eat Hunahpu’s arm, which was roasting on a spit.

Dentures Not as Advertised

Having tried an ambush, the hero twins now came up with a new plan to kill Seven Macaw. They enlisted two elderly healers and disguised themselves as the healers’ grandchildren. The healers walked by Seven Macaw’s home and commented on his very visible pain, saying they were healers of teeth.

Seven Macaw let the healers examine his teeth. They declared that his teeth were contaminated and needed to be removed. Seven Macaw was aghast at the thought of losing his beautiful teeth. The healers said it was the only way to cure his pain, and, besides, they said, they would give him dental implants that were made of ground-up bone which was as strong and beautiful as his natural teeth. Reluctantly, Seven Macaw agreed.

But when the healers extracted Seven Macaw’s teeth, they replaced them not with bone, but with corn kernels. When Seven Macaw realized what had happened and that his new dentures were not only ugly but completely useless for chewing, he lost his pride and let go of his spirit, dying on the spot.

Don’t Be Ashamed of Your Dentures

The story of Seven Macaw rings true for many people who get dentures. They were represented as being quality dentures, but in reality they turned out to be very unattractive and weren’t functional for eating.

If this is how you feel about your dentures, let us give you attractive and functional dentures. Please call (949) 551-5902 for an appointment with an Orange County denture dentist at Rice Dentistry in Irvine.