Ice Cream Headaches May Be Vascular 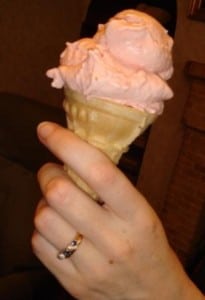 It turns out that ice cream headaches, also called “brain freeze,” but technically known as sphenopalatine ganglioneuralgia, may be caused by the sudden increase in blood flow to the brain. In a 2012 study, researchers monitored the blood flow in the brains of 13 healthy adults who were drinking ice water through a straw to ensure the water contacted with their upper palate, the trigger point for ice cream headaches. They found that when people were drinking the ice water, the blood flow in the brain’s anterior cerebral artery increased, putting pressure on the brain and causing a headache. The pain lasts until the artery constricts.

According to the lead researcher on the study, it’s a self-defense mechanism. Because the brain is important and sensitive to temperature changes, the body responds to the introduction of cold material to the palate by increasing blood flow to keep the brain warm. The headache is a necessary sacrifice when protecting the brain from potential freezing.

It’s worth noting that this study was only presented at a scholarly conference, and not published in a scientific journal, so its findings remain provisional. Still, it seems a promising lead.

Migraines are also caused by dilation of blood vessels in the brain, although the exact causes remain somewhat mysterious. People have been exploring the connection between the two for decades. In 1992, a published study showed that people with migraines were less likely to get brain freeze headaches, overturning previous notions that migraines and brain freeze were connected in some way.

However, there does seem to be at least an anecdotal connection between the two. More and more migraine sufferers are reporting that inducing an ice cream headache can actually stop a migraine attack in its early phases. Why this would be is mysterious, and the connection has not been investigated in any systematic way. We might think that increasing blood flow in the anterior cerebral artery on top of the already dilated blood flows associated with migraine pain would cause “double trouble,” but perhaps the brain freeze stimulus serves to regulate swelling in other blood vessels.

If you are looking for a drug-free treatment that has been shown to reduce the frequency and severity of migraines, you should investigate TMJ treatment to see if it is appropriate in your case.

To learn whether TMJ treatment might be effective against your migraines, please contact Rice Dentistry in Irvine, California today.

We’d Love to Talk to You!