Some people suffer receding gums because they made bad choices, such as not brushing teeth after drinking, but other times receding gums come as a result of bad luck in the genetic and anatomical lottery. That’s really the only way to describe this cause of receding gums, in which the location of your muscle attachments causes your muscles to pull your gums down. 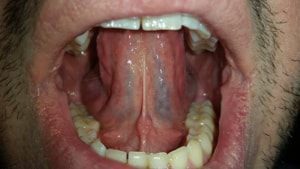 The muscles that move our lips and cheeks have to be anchored to perform their magic of creating so many different expressions full of nuance and subtlety. Among the anchoring points are some on the gums. They are attached by membranes of tissue known individually as a frenum (plural frena, also frenulum and frenula).

Ideally, these membranes should be attached in such a way that the durable tissue of the gums provides adequate resistance to the muscle action. But in some cases they are attached so high that they pull the gums away from the teeth, causing gum recession. Other times, they are initially attached in a reasonable place, but a small amount of gum recession destabilizes them, which causes much more serious receding gums.

To protect your gums from future recession, a frenectomy is performed. This is when the misplaced frenum is removed, helping to stabilize the gums. The effect on the muscles is typically negligible.

To learn whether this new, nonsurgical gum treatment is right for you, please call (949) 551-5902 in Orange County.