After You Quit Tobacco, It’s Time to Repair the Damage 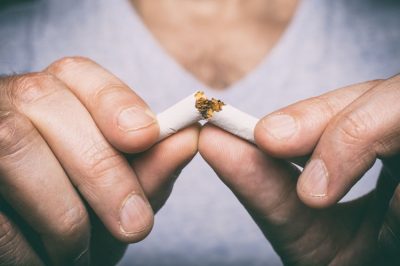 Smoking and smokeless tobacco use result in many serious health effects, including damage to your teeth and gums. One of the most common effects is receding gums. Receding gums, pain, and bleeding gums from dip often inspire people to quit smokeless tobacco. It’s one of the most common New Year’s resolutions. Quitting is a challenge, but more people do it than now ever before. Unfortunately, even quitting won’t bring back your lost gum tissue.

So how can you heal your gums after you quit dipping? Careful gum care can lead to healthy gums. Then gum rejuvenation can restore a youthful, healthy position to your gums.

How Tobacco Damages Your Gums

Tobacco is very bad for your gums, mostly because of the presence of nicotine, but also because of numerous other chemicals in the tobacco. First of all, nicotine restricts the blood flow to peripheral vessels in the body, such as your gums. With less blood, your gums have fewer resources to fight and thrive. They can’t repair themselves from injury. This means that any injury is more likely to cause receding gums.

Tobacco use also compromises your immune system. A compromised immune system makes you more vulnerable to gum disease. This increases the risk that bacteria will damage your gums and cause them to recede.

Dry mouth is a common condition in smokers because Oral Health Side Effects to Look out for. Saliva isn’t just water in your mouth, it’s a complex formula that nourishes and repairs gums and teeth while helping control oral bacteria.With less saliva, there’s more risk of receding gums.

Chewing tobacco, on the other hand, may be even worse than smoking for gums. Because of the direct contact between the tobacco and the gums, the gums can be irritated by all the chemicals in the tobacco, some of which are natural, others of which are added. This repeated irritation not only causes pain, but accelerates gum recession.

In recent years, the marijuana movement has scored victories in many states across the US, securing decriminalization. This means that people have access to marijuana for medicinal and even recreational purposes. Nowhere is this more common than in California. People often argued for decriminalization with the claim that marijuana use was safer than tobacco.

We don’t have the same level of evidence about marijuana that we do about tobacco. However, based on the evidence we do have, the safety benefits may be small. Marijuana can cause receding gums and other related health effects. Many of the mechanisms are the same, including dry mouth, immune compromise, and inflammation.

We Can Usually Restore Damaged Gums

The first goal after you quit dip is to try to get your gums healthy. Healing will occur naturally to some extent. We can also help you treat gum disease by cleaning out periodontal pockets and using antibiotics. Over time, this will stop bleeding, stop redness, and reverse the looseness of your teeth.

If you have suffered receding gums as a result of tobacco use, we can use our gum rejuvenation technique to bring them back. However, that’s only if your gums have recovered from their injury and are healthy again. Otherwise, it’s likely that they will just recede again.

To learn whether you are a good candidate for gum rejuvenation, please call (949) 551-5902 for a consultation with a cosmetic dentist in Orange County.